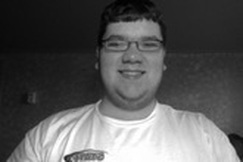 Anthony “Tony” Lawrence Klespis (May 7th, 1993) is a new judge on the DWTSGame judging panel. He is currently a freshman in college at Sam Houston State University. He was born in Chicago, Illinois, and moved to Texas when he was two years old, and and since then has resided in Texas. He is the second oldest of his family and was always considered “The Different One.” His mother had all boys, and all of his brothers were deeply engaged in sports. He never was interested, and always had a knack for the “artsy” side of life. His mother
was the person that got him interested in ABC’s Dancing With The Stars. She watched her first season in 2007 and Tony remembered her coming out into the living room announcing to the family that Sabrina Bryan was eliminated from the show, and later on, announcing that Kristi Yamaguchi had won. He watched his first episode of DWTS when Brooke Burke was announced as winner of Season 7. He became interested and watched Season 8 regularly, but Season 9 was the first season he watched almost religiously. Since then he has been an avid fan of the show, creating his own fantasy series online, as well. He found out about the DWTSGame when he noticed on a Wikipedia page that the link to the show had been placed in “Trivia.” He took a look and noticed Ke$ha was on the website! So naturally he voted for her, as she is one of his favorite artists. Natalie kindly offered an open judging position to him and he was thrilled to join. He hopes he can stay on as much as he possibly can and do the website justice!
Powered by