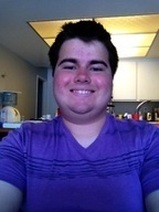 Ryan Allen Lane (born July 26, 1992) was born in Oak Harbor, WA; and moved to San Diego, CA when he was 9 years old. He graduated from San Diego School of Creative and Performing Arts in 2010, and is currently going to community college. When he was 18, he was on the Cartoon Network show, "Hole in the Wall" with his two sisters. He has been to live tapings of Dancing With the Stars and American Idol. He has met a wide array of celebrities throughout his life so far. Celebrities that Ryan has met include Meaghan Martin (from Camp Rock), Mitchel Musso (from Hannah Montana), Josh Hutcherson, Mark Ballas, and
Derek Hough. Throughout his early life, he was pretty quirky. He loved putting on shows for his family and making them laugh. He wasn't the smartest or brightest kid in his family, but he was the most lovable. He could be upset at times, but is pretty relaxed in most situations. Ryan describes himself as "a pretty cool guy". He is also very nice and sweet to everyone around him. In March 2012, Ryan was revealed to be the winner of a contest which allowed a special fan to become a part of the DWTSGame. He paired with Strictly Come Dancing professional, Natalie Lowe, and made it to Week 5 of the competition. Ryan is excited to join the judging panel.
Powered by