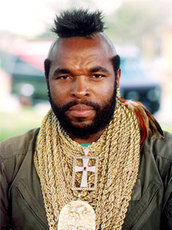 Laurence Tureaud (born May 21, 1952) is an American actor known for his roles as B. A. Baracus in the 1980s television series The A-Team, as boxer Clubber Lang in the 1982 film Rocky III, and for hit appearances as a professional wrestler. Mr. T is known for his trademark African Mandinka warrior hairstyle, his gold jewelry, and his tough-guy image. In 2006 he starred in the reality show I
Pity the Fool, shown on TV Land, the title of which comes from the catchphrase of his Lang character. 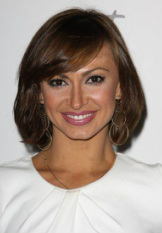 Karina Smirnoff (born January 2, 1978) is a Ukrainian professional ballroom dancer. She is a five-time U.S. National Champion, World Trophy Champion, and Asian Open Champion. She has made numerous candid
appearances on reality shows such as Dancing with the Stars, and Chelsea Lately, featuring Chelsea Handler. Smirnoff has appeared nude in a PETA advertising campaign with the tagline "I'd rather dance naked than wear fur" and also has appeared nude in the May 2011 issue of Playboy. 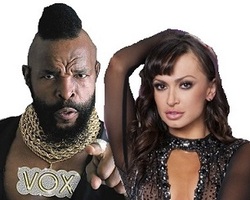