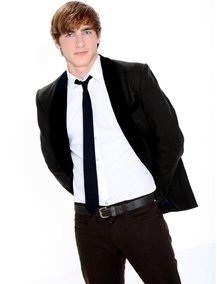 Kendall Francis Schmidt (born November 2, 1990) is an American actor and singer. He is best known for playing Kendall Knight in Big Time Rush. He has played small roles on different TV shows such as ER, Without a Trace and Frasier. He was born in Wichita, Kansas to Kent and Kathy Schmidt. He is the youngest of three. His brothers are Kenneth Schmidt and Kevin Schmidt who starred in hit film, '"Cheaper by the Dozen", "Cheaper by the Dozen 2", and "Princess Protection Program". Schmidt started singing at the age of 5. In mid 2009, Schmidt was cast in the Nickelodeon series Big Time Rush as one of the four main characters, Kendall Knight. The show premiered to a record breaking 7.1 million total viewers, making it the highest rated premiere for a live action series in Nick history. Kendall was a contestant, and eventual winner, of the re-boot season of the DWTSGame, Season 27. He was paired with DWTS Season 10 contestant, Erin Andrews's dancer sister, Kendra. Though a dark horse through the first half of the season, Schmidt proved himself in the second half and earned a perfect 150 points in the final week of competition, beating leaderboard topper, Jessica Alba, by one point. Schmidt returned to the game six months later to host/co-host the fourth season with Season 20 runner-up, Brittany Brannon (Miss Arizona USA 2011). The two are still currently in the positions, although Schmidt was forced to leave his hosting duties in Season 6 due to scheduling conflicts with his band's tour. His replacement was Season 20 winner, Jennifer Aniston. He returned to the game during the All-Stars season, this time, paired with Nicole Volynets. Schmidt and Volynets reached second place this time
around, losing to shockingly eliminated Season 4 contestant, Rihanna.
Powered by