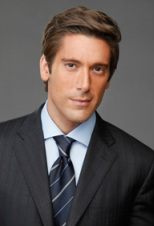 David Muir (born November 8, 1973) is an American journalist and anchor for ABC News, the news division of the ABC broadcast-television network based in New York City. Muir serves as the weekend anchor for the flagship ABC News broadcast "World News" and co-anchor of the ABC newsmagazine ‘20/20.’ In addition,  Muir is a principal substitute for “World News with Diane Sawyer” weeknights. David Muir has won multiple Emmy awards and Edward R. Murrow awards for his reporting both overseas and in the United States. Most recently, in February 2013, Muir reported from inside Iran leading up to the nuclear talks. He was the first American journalist to report from Mogadishu, Somalia on the famine. Muir and his team came under fire while reporting from Mogadishu. He was honored with the prestigious Edward R. Murrow award for his work. Muir is one of the most visible American journalists. The Tyndall Report demonstrated that his reports received the most airtime in both 2011 and 2012. Muir has been called one of the “12 to Watch” in TV News by TV Week. 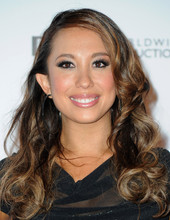 Cheryl Stephanie Burke (born May 3, 1984) is a professional dancer. She is best known for being the first two-time champion of ABC's American version of Dancing with the Stars. Burke won her first
championship with 98 Degrees member Drew Lachey in the second season. She won her second championship with retired football star Emmitt Smith in the third season. Burke had a guest role on the Disney Channel series The Suite Life of Zack and Cody, in the episode "Loosely Ballroom" along with fellow Dancing professionals Louis van Amstel, Ashly DelGrosso, and Lacey Schwimmer. 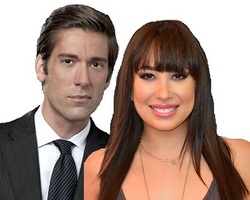