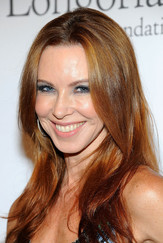 Challen Michelle Cates (born September 28, 1969) is an American independent film producer and actress best known for playing a role in the movie Monte Carlo and portraying Mrs. Jennifer Knight on the TV series, Big Time Rush, the mother of main character Kendall Knight (played by DWTSGame champion and host Kendall Schmidt). She has been the executive producer of two American independent films A Fare To Remember (1998) and The  A-List (2001). In addition to producing, she has also played the main character in both movies. In 2003, she played the lead female role in the independent movie They Would Love You In France. Since the beginning of 2000, Cates has also appeared in minor roles in several American television  series, including Cybill, Roseanne, Diagnosis: Murder, 1-800-Missing, Monk, CSI: NY, Desperate Housewives and others. In  2007, she had a part in the TV movie The Dukes of Hazzard: The  Beginning. 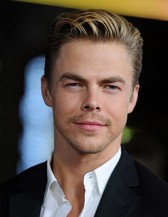 Derek Hough (born May 17, 1985) is an American dancer, choreographer, musician and actor. A world champion in Latin American Dance, Hough has appeared since September 2007 (Seasons 5 though 11) on the hit U.S. television series Dancing with the Stars, where he is a four-time champion (with Brooke Burke Charvet, Nicole Scherzinger, Jennifer Grey, and Kellie Pickler), a runner up (with Shawn Johnson in All-Stars), a finalist (with Ricki Lake), three-time semi-finalist (with Jennie Garth, Joanna Krupa, and Maria Menounos) and a Quarter-Finalist with Lil' Kim. Hough has earned three Creative Arts Primetime Emmy nominations for Outstanding Choreography (2009 and 2010) for his work on the show. Prior to joining Dancing with the Stars, Hough starred as Ren in the 2006 original cast production of Footloose: The Musical at the Novelo Theatre in London's West End, as well as on the 2006 U.K. national tour. Hough's
West End performance earned him a nomination as The Stuart Phillips London Newcomer of the Year in the Whatsonstage.com Theatregoers' Choice Awards. Hough made his Broadway debut on January 8, 2010, starring with Kym Johnson and Mary Murphy in Burn the Floor for the final four performances of the show's Broadway run. A founding member of the Ballas Hough Band (formerly Almost Amy), Hough shares lead vocals, plays guitar and has several songwriting credits on the band's self-titled debut CD, released by Hollywood Records in March 2009. 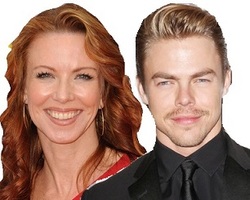